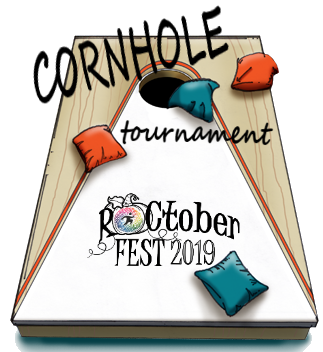 A turn consists of both players from one side throwing all four bags in an alternating fashion. After the first turn to start the game, the player on team that last scored a point throws the first bag for that turn. Once both players have thrown all four bags then the score for that turn is calculated, see scoring rules for details. No one should touch a bag until both teams agree on the points scored for that turn and tallied it to the overall game score. Once the game score has been tallied then the turn is over, and players can pick up bags and start next turn.

The scoring system is based on a cancellation scoring system. A bag in the hole is worth 3 points and a bag on the board is worth 1 point. A bag that hits the ground and bounces on the board does not count and should be removed immediately after the throw. A bag must be clearly on the board to gain a point. It must stay on the board if the front of the board is lifted 3”. If a player clearly steps over the foul-line then the bag does not count and should be moved immediately. Upon completion of a turn, total point from each player is calculated. The player with the higher score subtracts the points from the opposing player. The result of this calculation is the score for the team with the player w/ the higher score from that turn. If both players have the same score for that turn, then no points are awarded to either team.

The winning team is the first team to reach or exceed 21 points and must win by two.

Note: A game is not over until a turn is completed.