Such are some of the descriptions when a Rainbow of Challenges’ (ROC) individual is hired for full and part-time positions by local businesses.

Hope Public School System Child Nutrition Director Deanna Gilbert is one such person who thought outside the box and utilized the pool of prospective employees at ROC for work to be done in the Hope High School kitchen and other areas under her direction.

A 31-year employee of HPS, Gilbert is well-recognized in the community, the state, and the region, being named Arkansas Director of the Year and selected Southwest Director of the Year from numerous states. Under her guidance, Hope Public Schools received a USDA Silver Award for the summer feeding program in Hope.

“I love it,” she said recently. “I figured God put me here and it’s my passion. We try to reach the kids.”

Her decision to begin including ROC individuals in her food service work began with a conversation with Judy Watson, CEO of Rainbow of Challenges. “We were just talking about hiring some folks for our dining room, to help ROC out and to help us out at the school,” Gilbert continued. “I met with Lori Thompson from ROC and got the ball rolling from there.”

Getting the individuals work-ready was an easy task, once again, thinking outside the box on traditional training. “We started training programs for the individuals, using picture instructions, for example, to use the sealing machine and we went from there,” said Gilbert.

Once on the job, Gilbert became exposed to the many qualities an ROC individual brings each day. “These workers are here every day,” she said emphatically. “They are more dependable than many of my district workers. They take so much pride in their work and they just want to please. They want to do it right and they strive to do it right.

“To me, that’s been one of the best things we have done in our program, so we are expanding,” she said.  “We are steadily training more of the folks and when we need a substitute, we call y’all.”

While starting out in the dining room, the individuals are being cross-trained to work in other areas under Gilbert’s supervision. “They are as much a part of us as a district employee,”
Gilbert noted.

The skill level of the ROC employees is on par with others hired for the district. “If you slowly train them, they are willing to learn anything,” said Gilbert. “The training process is a bit different, but by watching us and by talking to us, they are picking everything up.

“For instance, Norma, working at (Clinton) Primary, she started working in our tray room, running dishes and washing trays all day, but she now is working in the kitchen as well when she’s finished with her other duties.”

There is no shortage of enthusiasm from the ROC employees. “When I walk in and see Norma, she lights up and says ‘Mrs. Deanna, I love it here.’

“They are just like us, they just have different avenues of getting there,” Gilbert confides. “That’s why I want to expand on it.”

Gaining employment in the community is reaching the “mountaintop” for an ROC individual. Becoming integrated in a workforce only reinforces the goals they have been striving for since coming into the ROC program.

The next goal is to motivate other employers in the area to also think outside the box and begin hiring ROC individuals in their businesses. “People are scared because they don’t know,” Gilbert stated. “They are welcome to call me and come watch them in action in the schools. We want them to see how well it has worked

“It’s a win-win partnership,” says Gilbert. “I’ve got a pool of good employees and even substitutes we can count on. I encourage others to give them a chance, even if it’s part-time. They will not regret it.”

Hope Public Schools’ Superintendent Bobby Hart shares the sentiments of Gilbert. “ROC adults have been an awesome addition to our district,” he stated. “HPS is able to staff quality workers and ROC is able to assist its clients with a job and a better sense of independence.  The production of our ROC workers is tremendous and I would encourage any organization to consider ROC as a potential workforce tool.  We are proud to be a part of such a wonderful relationship.”

Gilbert encourages other employers to call her with any questions or for a hands-on tour of what ROC employees can do for them at 870-777-3231.

Prospective employers who would like more information from ROC are encouraged to call Lori Thompson at 870-722-1276. 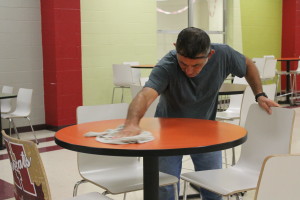 Happy Wednesday from the ROC family