Some say there are no angels on earth. For the skeptics, they need only to walk the halls and peek into the classrooms at any Making Rainbows facility in Hope, Lewisville, or the Prescott/Nevada County Special Services Child Services center. Inside they would see the loving hands and hear the voices of the angels known as Direct Service Professionals (DSPs) as they go about their daily activities.

This week, all across the country, the spotlight of appreciation shines on all DSPs during ANCOR’s National Direct Support Professional Recognition Week.

DSPs are employees who serve as direct care workers, in-home support personnel, personal assistants and attendants that ensure that all people with developmental disabilities are able to live more independently and integrate into the community seamlessly.

In the case of the children, their task is to ensure each child moves from preschool to kindergarten with the tools necessary to learn on the next educational level and become confident and successful students.

Two instructors at Making Rainbows in Hope stand out with those qualities and serve as examples of terrific DSPs.

Rashawnda Young has been with Making Rainbows since 2013 and with her infectious smile and soft voice it’s easy to understand why she is such a deserving DSP. She works with children at a very critical age between three and five-years-old.

“It was just the passion of working with children,” she says of what led her to apply for a childcare position. “It’s just not a job to me. I feel it’s my destiny.”

The teaching with a particular class doesn’t end after they move up to the next level. “When my kids move to the graduation class, I will ask the other teachers how they are doing and maybe share some tips that worked for me and help them progress and go farther,” she notes.

Chaos can sometimes reign with the children, but Young has the ability to identify what may be triggering their behavior. “As they come into my presence, I want them to come into a loving environment, a caring environment and welcome them to meet their needs,” she says.

Young knows at the end of the school year, she has put all of her energy and dedication out for her children. “It’s such a privilege,” she states. “If they only get one thing from me, maybe even learning to count from one to ten, it’s an achievement not only for them, but for me too. It was a goal we accomplished together.”

Rachael Simington is the ABC (Arkansas Better Chance) Lead Teacher. She’s been with ROC since 1995 and a second generation employee as her mother worked before her. She has a great foundation beginning as a Life Skills Instructor while in college before serving as a House Manager and Weekend Manager at some of the ROC group homes. She also has experience in the Medicaid Waiver component before finding her niche in Children’s Services. To say she has a well-rounded background in the world of a DSP is an understatement.

“I do believe I was born to be a teacher.  Ever since I was in fourth grade, I knew I wanted to be a teacher because we had popcorn every Friday,” she says with a laugh.

“I know what I do with the children at this age, four to five-year-olds, is going to have a major impact on the rest of their life,” she said.  “This could be a future doctor that I’m working with. It’s my job to instill these things in them.”

“I still see kids I had five years ago and their parents say ‘Thank you for what you did’. It helps a lot and it keeps me going.”

Simington sees the big picture. She understands when the children leave her care they will enter the next level of learning and it’s her desire they are on a level playing field with the other students. “Kindergarten is like a pre-first grade,” she says. “If they go in there lost, they are going to come out lost, so getting them ready to enter the real world is so important.”

Consistency in the classroom is a key. “I have it so that the kids can virtually run that classroom because of the consistency and repetition. They always know what comes next and it’s good they know how their day is going to go.”

Graduation day is an emotional one for Simington. Letting go is difficult. “Letting go is always hard for me,” she says. “I have built a relationship with that child, with their parents and I’m excited for graduation but it’s heartbreaking for me. It’s like my child. I take it real personal. I’m excited for where they have come and where they are going. “ 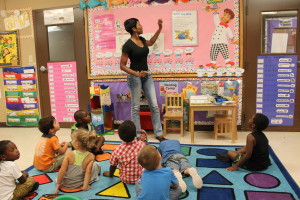 Come on out tomorrow to our open interviews from 1